Louise Moyes and the Daly Collective 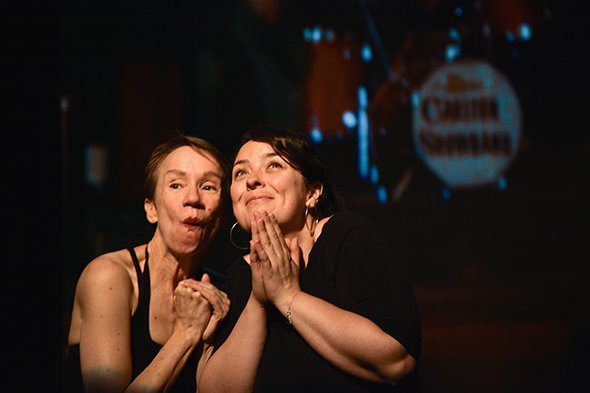 Louise Moyes and The Daly Collective, photo by Andrew Winter

This excerpt from If A Place Could Be Made weaves personal tales of inclusion into a journey of friendship and song. Louise Moyes and Diana Daly, together with director-collaborator Anne Troake, bring family memories to life through powerful images, dance, stories, laughter, and a bit of Carlton Showband!

The Daly Family Collective: Diana Daly, Louise Moyes, and Anne Troake have worked together in different capacities for many years. Just prior to this show, Troake co-collaborated with Moyes on choreographing and staging Lisa Moore’s short story All Zoos Everywhere (performed to date in St. John’s, Newfoundland; Older and Reckless Festival, Toronto; Performance Mix Festival, NYC, 2014; and Winterset Literary Festival, 2015). Moyes’ own docudance solo shows have seen Daly as collaborator, including as technical director on St. John’s Women. The three have been working together for three years to create If a Place Could Be Made.

Diana Daly is a musician from St. , who has been living in Montreal since 2007. She has worked in theater in many capacities for almost 20 years as a designer, manager, and musical director; in 2010 she released her first solo EP, When Women Kill. In 2015 Daly became a performing arts coordinator in communities in Nunavik, where she helps Inuit youth express their creative talents. She is a graduate of the National Theatre School of Canada and the creator/curator of the Lhasa de Sela Youth Stage at the Montreal Folk Festival.

Louise Moyes performs docudances: shows she researches, choreographs, and performs, working with the rhythm of voices, language, and accents like a musical “score.” She has performed throughout Newfoundland and Labrador and Canada, and in Germany, Italy, Iceland, New York, Australia, France, and Brazil. Moyes’ version of the Lisa Moore story All Zoos Everywhere was named one of the Top Three Performances in 2013 by The Overcast, St. John’s. Moyes and Paul Rowe’s interactive show Francophone Newfoundland and Labrador was given the 2014 Manning Heritage Award in the Provincial category. In 2016 she will spend five months doing research on working with people on the autism spectrum, story and dance. This year also represents Louise Moyes’ docudance’s 25th anniversary!

Anne Troake is a multidisciplinary artist from Twillingate, Newfoundland. Her practice has its roots in choreography and dance but often utilizes other forms. Her creations have appeared on television, screen, stage, galleries, and in public spaces. She recently completed a master’s degree in anthropology and a stereoscopic macro dance film entitled OutSideIn.

Lori Clarke has collaborated with dance, theater, and film artists as sound designer, composer, improviser, and performer for more than 25 years. Her collaborations with Louise Moyes during this time have included acoustic and digital instrumentation, referring to multiple aesthetics and traditions from musique concrète to jazz to electronica. Her current work and research interests are informed both by art practice and practice in somatic psychotherapy. Clarke holds an MA in somatic psychology from the California Institute of Integral Studies (1995) and is currently an ID Ph.D. candidate at Memorial University while entering her second year of training in Somatic Experiencing™—an effective approach to supporting nervous system self-regulation with persons who have experienced trauma.

See video of Louise Moyes and the Daly Collective

It’s hard in New York to find a context to present the kind of work I do—short solos, less than 15 minutes.  Most presenters want a whole evening’s worth of work, something which at this point of my dancing/performing life holds little interest for me. The Performance Mix Festival has offered me, and countless others, a situation in New York to present our work. It is a well established festival, presented in well known venues in Manhattan, and for this I am very appreciative. Long live the Performance Mix Festival!