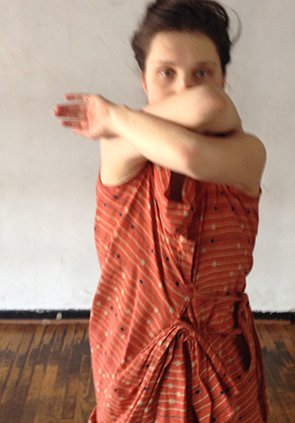 Nina Winthrop formed her company, Nina Winthrop and Dancers, in 1991. Her works have been presented in venues throughout New York and Los Angeles, including Danspace Project, Joyce SoHo, Brooklyn Academy of Music, Movement Research at the Judson Church, Mabou Mines’ Toronada Theater at PS 122, Roulette, Basilica Hudson, and The Flea Theater. Winthrop was the curator of Dance Conversations @ The Flea from 2005 to 2013. A graduate of Bennington College, Winthrop danced with Wendy Perron, Susan Rethorst, Yoshiko Chuma, Sally Silvers, and Kei Takei, with whom she toured the U.S. and Japan, and studied with Erick Hawkins, Merce Cunningham, and Deborah Hay.

NDA Performance Mix Festival 2013 offered me an opportunity to present a new work in progress and to take an artistic risk by going in a new direction. As an artist at the border of theatre and dance, I was honored to be included in the festival and to be part of the community that was created during those weeks. The festival was a positive experience overall and I am grateful to NDA for including me.