Featured in Three Genres of Improvisation: Raise the Hoof

Jennifer Vincent, bassist and cellist, has been an active force on the jazz and Latin scenes in New York City for the past two decades. She plays, tours, and records (and has played) with the likes of Betty Carter, Abbey Lincoln, the Harry Whiteaker Group, drummers Willie Martinez and Roberto Rodriguez of Miami Sound Machine, Jon Hendricks, Paula West, Carmen Lundy, Son Sublime, and the famed Boys Choir of Harlem. She has had the good fortune to study at the New School with jazz and Latin jazz legends Ron Carter, Buster Williams, and Andy Gonzales. In 2001 she traveled to Cuba to study with Orlando “Cachaito” Lopez, bassist of the beloved Buena Vista Social Club. For the past seven years she has held the bass chair for the Duke Ellington Orchestra, touring the world over while carrying on the tradition of the longest-running and most legendary band in American history. 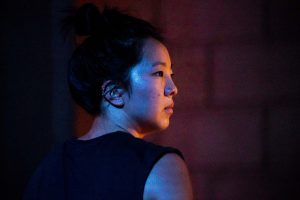 I’m really glad that Performance Mix #34: Remotely Yours turned out to be so productive for me. I was able to wrap my head around the ideas that were all circling in my head.